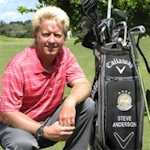 PGA Master Professional Steve Anderson
Steve is the Director of Instruction for Hampton Golf Clubs and is based at River Hall Country club in Alva, Florida, just outside of Ft. Myers. Hampton Golf is one of the nation’s leading golf management companies and its president is MG Orender, the 33rd president of the PGA of America.

Steve turned professional in 1980 while serving his apprenticeship at Eagle Haven Golf Course in Norfolk, then moved on to teach at several prestigious private clubs in the Virginia Beach area.

1986 Steve worked for Arnold Palmer at Isleworth C.C. in Orlando, home to many of the PGA Tour’s top players. In 1992 he moved to Hilton Head Island S.C. to head up the Ken Venturi Golf Training Center. His 4 years working closely with one of the game’s all time greats sharpened his skills as an instructor.

In 2004 Steve was awarded Master Professional status from the PGA of America, the highest teaching achievement offered by the PGA. His thesis on the “3 Fundamentals in the Golf Swing” set the preliminary ground work for his best-selling book, On the Other Hand, available in both print and digital form. Steve is the PGA's only left handed Master Pro. While most of his students are right handers, lefties come from around the world to to learn from "one of their own."

Twice a Golf Magazine “Top Teacher in America” Steve has developed the “Mirror Image Golf Swing” which is revolutionizing the way the game is taught with the first new teaching concept in a generation. His Mirror Image system will make learning the game easier than ever.

MG Orender wrote in his forward of the 5th printing of On the Other Hand, “Steve is one of the elite instructors in the game and his knowledge of the game and enthusiasm for teaching is rarely seen.”Sign Me Up! Login